Our Kemp’s Ridley sea turtle (Lepidochelys kempii) nest on the Bon Secour National Wildlife Refuge hatched on Monday 16 July. In order to collect important productivity information, the Bon Secour National Wildlife Refuge interns excavated the nest this morning, Thursday 19 July. Nest excavations are used to determine the number of eggs laid, estimate the number of hatchlings which successfully emerged from the nest, count how many embryos did not complete development and determine at what stage their development stopped, identify any subterranean predation by ghost crabs (Ocypode quadrata) or infiltration by sea oat (Uniola paniculata) roots, and the depth of the nest. As all sea turtle species in the U.S. are protected under the U.S. Endangered Species Act of 1973, this data is critical for annual reproduction estimates and population modeling.

108 eggs were laid in this nest and a total of 87 hatchlings successfully reached the Gulf of Mexico. Unfortunately, a ghost crab got into the nest after the mass emergence on Monday, resulting in 7 hatchlings being unable to get out of the nest. 8 live hatchlings were still in the nest during the excavation – these were quickly released near the shoreline to crawl out to sea under their own power. It is not uncommon to find a few stragglers left behind following the mass emergence of their siblings. Sea turtle survival to adulthood is very low, often quoted as 1 in 1000, but hopefully at least 1 of these hatchlings makes it back to our beaches in 10-12 years as an adult. 1 hatchling was confirmed predated by a laughing gull (Leucophaeus atricilla) soon after reaching the water. About the size of a McDonald’s chicken nugget, sea turtle hatchlings are common prey items for a range of predators, including birds, crabs, fish, and sharks. 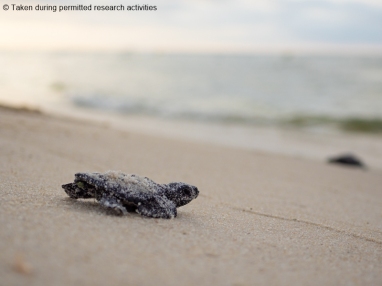 As part of my Ph.D. research, this nest was also outfitted with a PVC device to monitor groundwater inundation and a temperature sensor to track sand temperature throughout the nest’s 2-month incubation. Sea turtle eggshells are soft and leathery, not hard like a chicken egg, and can only spend a limited amount of time underwater during a storm or high tide. It is currently unknown how long developing embryos can “hold their breath”. Understanding this limit is crucial to identifying portions of the beach unsuitable for sea turtle nesting. This particular nest remained dry during its entire incubation. Sea turtles have temperature-dependent sex determination – the warmer the sand, the more females are produced (think “hot chicks and cool dudes”). Hence, the temperature sensor gives us an approximation of the thermal conditions experienced by the nest. The sensor was placed 0.5 m away from the clutch, so it did not capture heat generated by the embryos as they develop, but the sand temperature data can help inform sex ratio estimates and identify times during the incubation when development may have been compromised by overly cold or warm temperatures. Each of our nests on the Fort Morgan peninsula of southern Alabama have been outfitted with these devices. Stay tuned for additional updates as the summer progresses.